The other day I were talking with a trader about his day trading and he was showing me some charts. I noticed he was using several leading indicators which we have previously warned about. So we decided to create a new video explaining the different indicators that exist. Not MACD or Stochastic but the different types; Lagging, Leading and Confirming Indicators.

The 3 Different Types Of Indicators

Confirming indicators are used to "confirm" an entry signal by for example using volume. Confirming indicators as a stand alone is pretty weak but they are useful to improve the odds of success by filtering out some of the fake signals. By removing perhaps 10% of your losing trading you are improving your bottom line.

How To Use All 3 Types Of Technical Indicators

An example of how to put this to work is for example by using a Moving Average to determine the trend. This is called a filter. You are filtering out the weaker trades and in this case it would be the counter trend trades. The Moving Average would also prevent you from trading chop and sideways price action. A great use of an indicator from the group “lagging indicators”.

Next you will be looking for an indicator that can help you enter a trade in congruence with the above “lagging indicator”. So if your Moving Average showed an uptrend you would then look for a long entry. One way to do that is by using Stochastic. So when Stochastic is oversold, which means a retracement in an uptrend, a buy order can be placed. You have now combined a “lagging indicator” with a “leading indicator”. Notice how they compliment each other and not substitute each other.

Last but not least you can use a “confirming indicator”. Because we are trading a trend (determined by our Moving Average) it could be smart to use the ADX - Average Directional Index. This “confirming indicator” helps you gauge the strength of a trend. Basically telling you the trend is valid and strong enough for you to buy the dips using Stochastic.

I have seen many traders learn about an indicator and believe they now know all they need to know for them to become profitable trading the stock market. Do not make that same mistake. Learn what indicators are and why you would choose one indicator instead of another.

Moving Averages is the backbone of my trading. I use it on almost every chart I analyze and it is what I use to determine the trend 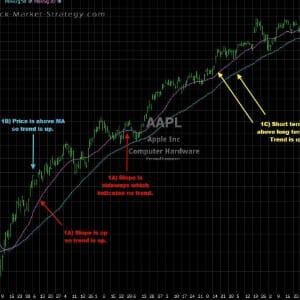